Every agency has a culture. The question is – is it intentional? And when I say culture, I’m not talking the beer thirty or holiday party aspects of culture. I’m really focusing in on the shared beliefs and agreed upon “rules” of engagement in terms of how we work together, deliver for the client and push towards our goals.

In too many agencies, this is not as intentional as it needs to be. The agency’s vision, mission, and values may exist somewhere, in a file folder, or at best in an employee manual, and then agency owners check off the box, hoping that their team picks up on it. It’s culture by default, not by design.

I’ve become increasingly convinced that culture isn’t just a nice idea. It’s not simply a day out serving the community or a potluck lunch held the first Tuesday of every month. Those things can be good and a part of the culture but the concept goes much deeper than that and it has implications for the bottom line.

In this episode, I talk with Tristan White, who early on in his business realized that intention and methodology were necessary to build a strong and healthy work culture. He soon realized that culture isn’t a distraction. It isn’t peripheral to business. Culture is everything.

Tristan White is the CEO of a company called The Physio Co. in Australia. Its core purpose is to increase the physical wellness and activity levels of seniors to keep them healthier, happier, and more mobile.

In the process of building The Physio Co., Tristan did a lot of learning and a lot of experimenting with respect to culture and its influence on company performance. He ended up writing a book called Culture is Everything. Inside that book, Tristan lays out a system for building a foundational culture inside your organization. We explore that system and dig into why culture is so critical to running a long-term successful business. EP 185: What we learned from the 2019 agency salary & benefits survey with Drew McLellan 0

The results are in, and 2018 was clearly a good year in agency life.

On this episode, I unpack and dig deep into the findings of our most recent Salary and Benefits survey. Employees are reaping the benefits of the continued tight labor market. Agencies that want to attract and keep the best and brightest are paying better and providing some robust benefits.
We all know it’s hard to compete against the lure of a corporate paycheck, but agency life has so much more to offer than corporate life. Many of you are finding ways to express that to your employees, and my advice is simple: keep going!

There are many more trends to unpack and some considerations for what the road ahead may look like. The salary and benefits survey always gives us a lot to talk about, and this year is no exception! 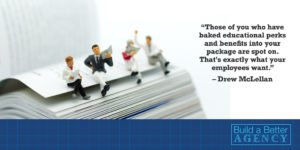 Drew McLellan is the CEO at Agency Management Institute. He has also owned and operated his own agency since 1995 and is still actively running the agency today. Drew’s unique vantage point as being both an agency owner and working with 250+ small- to mid-size agencies throughout the year gives him a unique perspective on running an agency today.

Because he works with those 250+ agencies every year — Drew has the unique opportunity to see the patterns and the habits (both good and bad) that happen over and over again. He has also written two books and been featured in The New York Times, Forbes, Entrepreneur Magazine, and Fortune Small Business. The Wall Street Journal called his blog “One of 10 blogs every entrepreneur should read.”

Helpful Resources from this Episode:

EP 184: Embracing the word “NO” in agency biz dev with Andrea Waltz 0

Let’s admit it. Agency owners are reluctant salespeople. However, biz dev should be a significant part of how we spend our days.

When I hear agency owners say that they don’t have to prospect because they get so much business via word of mouth, I always ask, “Are those the clients you would choose to work with or are you simply working with them by default?” When we’re honest with ourselves, the truth can sting a little.

I get it – no one likes to be told no. That doesn’t make selling any easier. But how do we change our mindset? Hearing no (or deafening silence) feels like a failure, so we avoid it at all costs. But what are the costs of fearing the “no” and settling for whatever comes our way?

In episode #184, I talk with Andrea Waltz, co-author of the best-selling book, Go for No. We have to re-think the word no. A “no” is one step closer to a “yes”.

Andrea and I talk about the no, not just in sales, but also in the creative process. Sometimes we phone it in because big, bold ideas have been rejected in the past. So we play it safe, even though we know that’s not in our clients’ best interests.

Andrea Waltz is a keynote speaker, author, and sought-after sales strategist. At the age of 8, she called George Lucas to see if she could work with him on future movies. She was the youngest general manager in eyeglass retailer Lenscrafters’ history. At the age of 24, she launched her own training company. 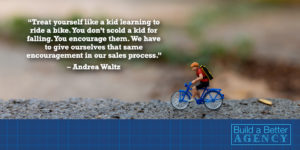 Episode 183: Leveraging and Scaling Word of Mouth with Steve Gordon 0

For 95% of all agencies, referrals and word of mouth are the #1 method of gaining new clients. On the one hand, that’s great. It means your clients, friends, and peers love and trust you enough to introduce you to their friends and colleagues.

Unfortunately, they’re not always the right clients for our agency.  What if they aren’t a good fit? What if they are the furthest thing from a sweet-spot client for who you are and what your agency does? We have to be more intentional about referral and word of mouth.

That’s why my conversation with Steve Gordon arrived right on time. Steve has developed processes and systems that you can use to leverage word of mouth, qualify referrals, and scale your efforts so you don’t have to spend more time in one-on-one meetings than you have hours in your already stretched-to-the-limit day.

Steve Gordan started the Unstoppable CEO in 2010. He has invested nearly two decades into studying, implementing, testing, and proving the strategies that work to sell professional services.

Through Unstoppable CEO, Steve shares this knowledge with growth-minded professionals who are ready for world-class help with their marketing. He has become an expert at leveraging and scaling referral systems and word-of-mouth marketing techniques. 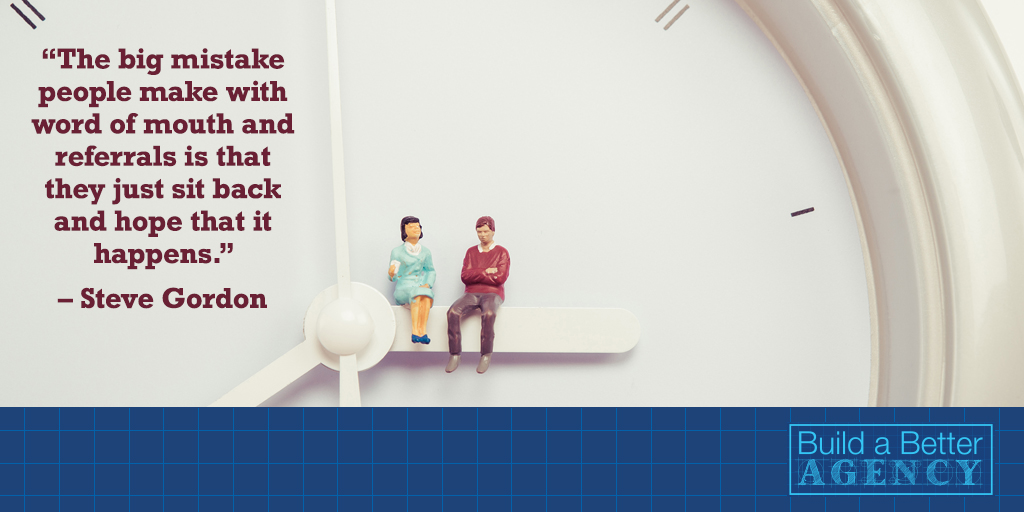 When you think about or define a global agency, do you think of those giant conglomerates that started on Madison Avenue and have mushroomed into marketing behemoths? Well, that’s one model – but certainly not the only one. What if your global agency was set up more like a series of regional micro-agencies still under one banner?

On episode #182 of Build a Better Agency, I talk with Josh Steimle, who has developed a unique business model that is really working for him and the growing team at MWI.

We dig into it all: how to develop a cohesive culture across multiple locations, how to hire well, and how to niche down. What they are doing is still very unique in the agency world but seems to have the potential for replication – as many successful ventures do.

Josh founded MWI in 1999 while a college student at Brigham Young University in Provo, Utah. In 2013, he moved from Salt Lake City to Hong Kong to open MWI’s first international office.

Josh is the author of Chief Marketing Officers at Work: How Top Marketers Build Customer Loyalty, a TEDx speaker, and regularly presents at marketing and business events. He has written over 200 articles on marketing and entrepreneurship for publications like Mashable, TechCrunch, Forbes, Entrepreneur, Fast Company, and Time. 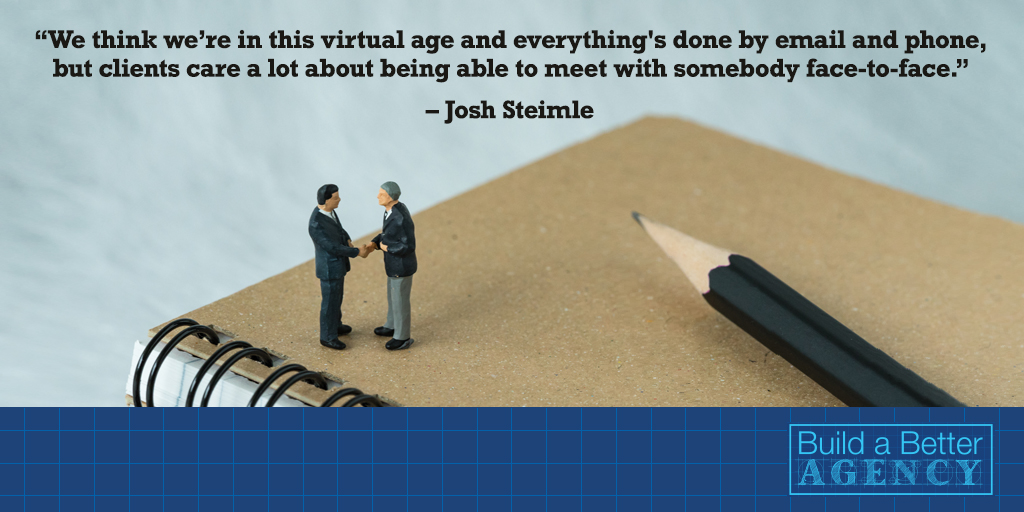